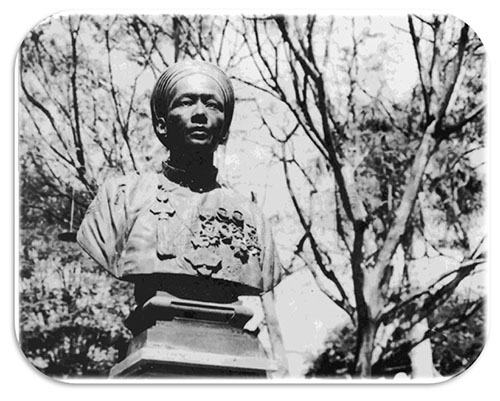 By: Leyland Cecco and Annie Sakkab in Ontario, Canada

Living in a Thai refugee camp in 1980, Trung found solace in the pages of his sketchbook. Today, in Canada, his work records that flight from danger.

In Trung Pham’s basement, shafts of afternoon sunlight shine on the newspaper clippings and photographs that chronicle his rise as an artist. Most of the articles are now yellowed by time and the photos have a thin layer of dust resting on the glass. But the memories are vivid, sharp and clear.

In 1980, brothers Trung and John joined the waves of people fleeing persecution in Viet Nam, slipping away from Saigon one night in a small wooden boat with 59 others. In fleeing, they left behind family, friends and the home they had known all their lives. Trung left with nothing but a black leather satchel – a prize from elementary school. Inside, he stuffed sketches and watercolour paintings.

“I left behind my girlfriend,” Trung says. “I still remember the tears on her face when I told her I was leaving. I’ll never forget that.”

Trung was among nearly 800,000 Vietnamese who crammed aboard boats and ships to flee repression after the fall of Saigon in 1975.

His boat was headed for Thailand, but after seven days on choppy seas, it began to drift off course and was intercepted by a large fishing boat, whose crew tried to return it to Viet Nam. But terrified of reprisals, the passengers rose up, commandeering the larger vessel and resuming their voyage.

After reaching Thailand, Trung lived in the sticky heat of a refugee camp. Each month he received money from Long, his older brother who was studying in Japan and wanted to support his creative talents.

“Trung, he’s an artist,” says John. “So he used that money to buy papers, watercolours and brushes.”

The young painter used the materials to document life in the camp, sketching his impressions onto pages with black ink as he awaited resettlement to Canada as a refugee, with his brother.

Now, 37 years later, he still keeps those pages in the house he built for himself surrounded by rolling fields near Owen Sound, in southern Ontario.

The weighty quiet of his home in the country suits him, he says. A porch extends from the back of the house, overlooking acreage of thickets, trees and water. In the living room, the satchel, a relic of his early years in Viet Nam, sits in a glass case.

The home is far removed from the Thai refugee camp and Toronto, where Trung spent his early, hectic days in Canada. But no matter how far he physically moves from the journey, it never leaves him. His most recent sculpture, a cracked wooden boat with a family of three slamming up against the waves, is a tribute to journeys similar to his. According to some estimates, just half of all families who made that trip survived.

Canada has given him the refuge he needed to focus on his work, he says. His paintings and sculptures have been displayed in some of the country’s most prestigious institutions.

In tribute to the nation that welcomed and resettled him and his siblings, Trung created busts of 10 famous Canadians, including then-Prime Minister Pierre Trudeau and environmental advocate David Suzuki.

“When you die you are buried,” says Trung. “But the soul – the spirit – is still alive. I want to make sculptures that we can look at, so people can remember any day, any time. It lasts forever.”

Inside the exposed pine ribs of Trung’s studio, a dusty haze of plaster settles over the large busts congregated around his table. The diversity of his subjects is testament to his passion and vision – a former Canadian prime minister rests opposite Vietnamese generals. On the far edge of one row, Trung’s late mother watches over his work.

The City of Mississauga, near Toronto, is currently working with Trung to cast a large statue in commemoration of the many Vietnamese residents now living in the area.

“Younger Canadians don’t understand why our people came to Canada,” says Trung. “But now, this figure – this statue – will show them the boat that carried the Vietnamese to freedom.”

He hopes his work conveys the tragedy, as well as the dreams of those who fled Viet Nam.

“Artists, they have their special soul,” says John. “His expression is through art – sculpting and painting. That’s his life. And he will continue to do that until his last days.”

Then and Now is a series of stories profiling refugees who have come to Canada over the years, in search of safety, stability and a chance at a better life. Starting from 1956, when Canada accepted its first major intake of refugees, the project uses archived images and family photos to tell the stories of refugees from Hungary, Viet Nam, Uganda, Somalia, Colombia, Cambodia, Burundi and El Salvador.